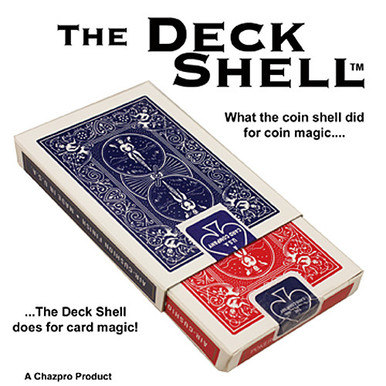 The Deck Shell What the coin shell did for coin magic....... the Deck Shell does for card magic! "Great idea!" John Cornelius "That's Incredible!" Jon Racherbaumer "It inspires the imagination." Michael Ammar "First time I've been fooled in years." Michael Close "Very clever. I see many applications." Stephen Minch "A revolutionary accessory for card magic!" Aldo Colombini Perform incredible feats of card magic with Chuck Leach's Deck Shell. One of the most unique card gaffs ever created, used by professionals and hobbyists....The Deck Shell makes the impossible, possible. The amount of effects possible with the Deck Shell are endless. From close-up to stage, from comedy to mentalism, the Deck Shell can do it all with ease. One effect: A spectator selects and signs a red card from a red deck. The card is returned to the deck and the deck to its cardbox. A blue card box is brought out, and the blue deck is spread. All the cards are blue backed except one...which is red backed. This card is removed and turned over...it is the spectator's signed card! No sleights. The Deck Shell will allow you to switch decks without detection. The included DVD offers a wide range of effects, from stage mentalism, to close-up miracles at the table. With the DVD you can jump right to the routine or sleights you wish to learn. Additional information is offered in the included print instructions. The Deck Shell is a metal shell with a real card box cover. They come in Bicycle red or blue backed, poker-size.