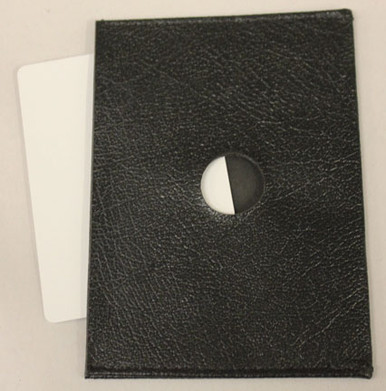 The Eclipse Wallet is Magic's only visible switching wallet! The spectators actually see the switch take place, but what they see convinces them a switch is impossible!

A card is selected and lost in a deck. The performer shows a card that is blank on both sides, calling it Thought Film. He inserts it into a thin Thought Camera. There is a hole in the center of the camera. As the film goes in, spectators can see the card outside the wallet and via the hole at the same time. The 'film' is initialed via the hole by a spectator. The performer asks the spectator to concentrate on their card. He 'snaps' a picture and slowly slides the film out of the camera. The 'film' has developed into an image of the chosen card, withe the spectator's initial!

The Eclipse Wallet can also be used to print business cards, or use with blank cards for many different themes and routines, from kid tricks to mentalism, to risqué bar magic.

See our Blog for a video of the Eclipse Wallet with a business card.