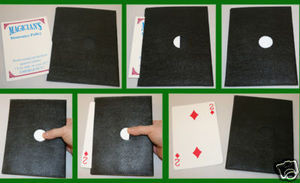 Chazpro's Jumbo Eclipse Wallet. We sold out of these years ago, but recently discovered a small supply in our warehouse. This item allows the magician to visibly switch a card. The amazing thing is the spectator actually sees the switch take place, but what they see only convinces them that a switch could NOT have taken place!

They see the card go into the wallet ... part of it is still outside the wallet, and part of it is seen sliding past the hole in the center of the wallet. It all makes perfect sense! The Jumbo Eclipse Wallet comes with jumbo cards and the gimmicked wallet, plus a jumbo Magician's Insurance Policy.

One routine has the performer explaining that the wallet is a new type of thin, Thought Camera. A blank card (film), is slid into the wallet. Spectators see the card slide past the hole in the center. A spectator selects and remembers a card from your own deck. While he concentrates on his card, you 'snap a photo' of his thought waves. The spectator can actually slide the 'film' from the wallet to reveal that it has developed into their card!

Another routine has a magician sliding a Magician's Insurance Policy into the camera. Say the magic word and slide the policy out and it has changed into the selection. A variety of additional tricks are described in the instructions.

Jumbo Eclipse Wallet (01:26)
Our famous Eclipse Wallet is available in Jumbo size for stage and platform performances. Use it to jumbo playing cards, or use like Spirit Slates to print messages.