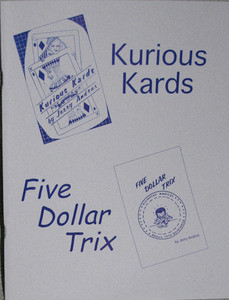 Kurious Kards - Five Dollar Tricks - Jerry Andrus This combo book offers two of Jerry's classic books in one volume: Kurious Kards & Five Dollar Tricks. Kurious Kards is a fascinating exploration into fancy and unusual displays that can be accomplished with a deck of cards: Water Falls, Multiply Water Falls, assorted ribbon spreads and more. This is the material that Jerry performed on the Omni Magazine television program. Once can build an act around this material, or utilize some of these presentations for magic routines. Jerry lists many ideas for using these displays in magic effects to dramatically reveal a card. (For example, A card is selected, signed and lost in the deck. The magician interweaves the cards and performs an impressive double water fall with the cards (backs towards the audience). At the sudden finish, the performer is left holding the selected card, face towards the spectators. As usual, Jerry offers a wealth of tips and ideas in this book. Five Dollar Tricks offers five Andrus routines with dollars (coins and bills). He also explains some coin moves and a single and multiple coin holder. If you have not exploited coin holders, you are missing one of the more useful and powerful accessories in magic. One of the effects in this book is Double Dollars, where a borrowed dollar bill is shown on both sides, then opening folded into a cone, at which time the magician pours a half dollar (or dollar) coin from it. The bill is unfolded, shown around, then refolded into a cone and another coin is produced. Three coins are produced (for your next trick?) and the bill is returned to the lender. Between these two books is a wealth of unique, Andrus magic knowledge that every lover of magic will find value.