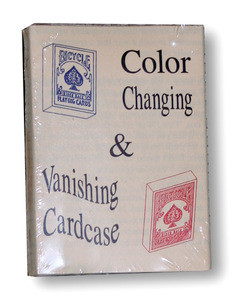 This listing is for a Color Changing and Vanishing Deck by Chuck Leach & Chazpro Magic Co. This new items comes with several routines and was a popular item a decade ago. A card box is shown and the performer squeezes the deck and the card case vanishes. A spectator selects and sings a card from the blue deck. The card is returned to the deck, which is returned to its blue box. A magic 'through the fist' move and the card box changes to red. Remove the deck and it is now seen to be entirely red... except for one card... the spectator's blue backed, signed selection. Easy to do. Deck is Bicycle, poker-size. Includes instructions.